About My Vacation: Cleopatra SPA Experience

This is the second post about my vacation and this time it’s about SPA (First post about food you can check out here). I heard that Cleopatra is a very famous treatment is some Arabic countries and mostly in Egypt so I wanted to give it a try. So what is in the programm:

Sounds great, right? But before I tell you my impression here is some general information about Cleopatra (known also for all the beauty rituals that she loved) for you. 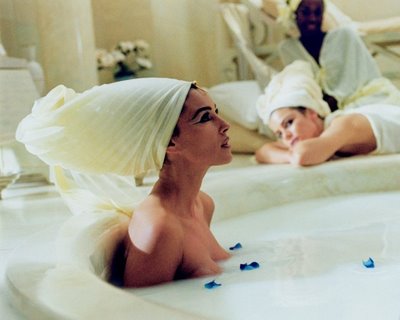 Cleopatra was regarded as a great beauty, even in the ancient world. In his Life of Antony, Plutarch remarks that “judging by the proofs which she had had before this of the effect of her beauty upon Caius Caesar and Gnaeus the son of Pompey, she had hopes that she would more easily bring Antony to her feet. For Caesar and Pompey had known her when she was still a girl and inexperienced in affairs, but she was going to visit Antony at the very time when women have the most brilliant beauty”. Later in the work, however, Plutarch indicates that “her beauty, as we are told, was in itself not altogether incomparable, nor such as to strike those who saw her.” Rather, what ultimately made Cleopatra attractive were her wit, charm and “sweetness in the tones of her voice.”

Cassius Dio also spoke of Cleopatra’s allure: “For she was a woman of surpassing beauty, and at that time, when she was in the prime of her youth, she was most striking; she also possessed a most charming voice and knowledge of how to make herself agreeable to every one. Being brilliant to look upon and to listen to, with the power to subjugate every one, even a love-sated man already past his prime, she thought that it would be in keeping with her role to meet Caesar, and she reposed in her beauty all her claims to the throne.”

The source of all information above is Wikipedia. You can read the rest of this article there. And  you can also check out different actresses playing Cleopatra.

So this is my impression