Who doesn’t want a good looking skin and an even complexion? One of the problems of our time is hyper pigmentation, which can  be the reason why a lot of women (and men) get upset. Mainly because it’s not the easiest problem to solve, and because it may take a lot of time to conceal. Since the way we look  often affects the way we feel, a lot of people are willing to try radical, expensive and often harmful methods when it comes  to hyper pigmentation.

But what causes it and what are the forms?

And what is the solution?

Of course, it is always better to prevent but of you already have the hyperpigmentation, what should you do? Is there an ingredient/product that is effective, not harmful and doesn’t cost a fortune?

Here is a little bit of the scientific information for you:

“Historically, hydroquinone is the most used substance in skin whitening treatments. Concentrations of hydroquinone up to 8% – 10% turned out to be very dangerous for the human health. Due to an indiscriminate use and to its CARCENOGIC effects, hydroquinone has been banned by the European Union (The 24th Directive 2000/6/EC) and by other countries, such as Australia and South Africa.

Pidobenzone is a 2nd generation molecule as effective as hydroquinone for pigmentation disorders, but without its carcinogen effects. Pidobenzone and hydroquinone have a common base, but thanks to a chemical group (esterification) their behavior is different.”

K5 Lipogel by Friulchem S.p.A. is a skin-bleaching product, which contains pidobenzone and other active ingredients, such as salicylic acid and solar filter.

According to the brand, it’s a product with an effective whitening action on the brown skin spots due to excessive sun exposure, age, oral contraceptives, use of photosensitizing products, freckles and pigmentation around scars caused by acne or surgical intervention.

It does not undergo microbiological contamination because it is made of 99% of lipid ingredients that do not offer a proper culture media for microbial growth.

How To Use It? And What are the Ingredients? 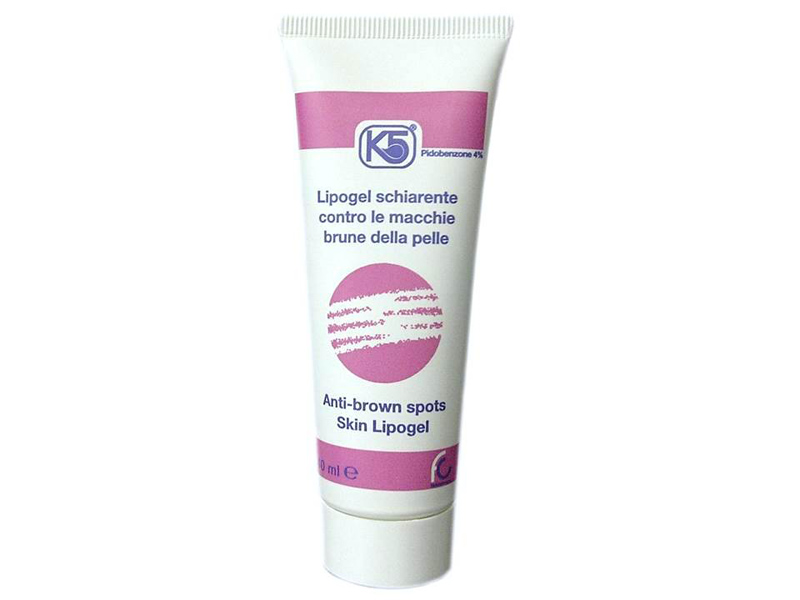 Suggested use:  Cleanse thoroughly area to be treated and apply, twice a day, a sufficient amount of K5® with a soft massage until the product is totally absorbed. Apply before make-up. Noticeable results are obtained after the third/fourth week of treatment, though the use of K5® should be continued for six or eight weeks to stabilise its depigmenting action.

You can get it from Fc-store.