I have actually posted this on Facebook and Twitter already but why not mentioning it here, as well?

Check out the Pantone colour of the year – Greenery. What do you think of it?  Expect to see a lot of beauty products this shade of pistachio green, like the shown below butter LONDON nail varnish.

Speaking of nail polishes, back in 2012 a very similar but a bit more pastel pistachio was the hottest shade for manicure, every brand would bring out a shade like that, and this one was my personal favourite. I remember how I’ve created a whole list with over 20

END_OF_DOCUMENT_TOKEN_TO_BE_REPLACED

Lately I’ve been into nail polishes more than I should be. Last month I’ve got 13 new nail polishes, and for someone who used to have only three, that is a lot. The worst thing that I want more and more, and more. 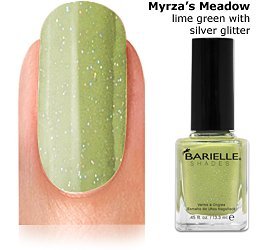 Right now I have RGB, Julep, Rescue Beauty Lounge, Zoya (yes, I haven’t tried Zoya yet), Leighton Denny, Nails Inc (yes, I know), SpaRitual, Nubar (really) and I could go on my ‘to try list’. But on top of my wish-list is Barielle’s Myrza’s Meadow.

I’ve been wanting it ever since it launched which was in Spring 2010. Have no idea why I still don’t have it. Will have to get it as soon as possible.

By the way, since I am so into nail polishes, there will be a special nail polish section in the Spring’s Magazine 🙂

What nail polish is on top of your wish list?